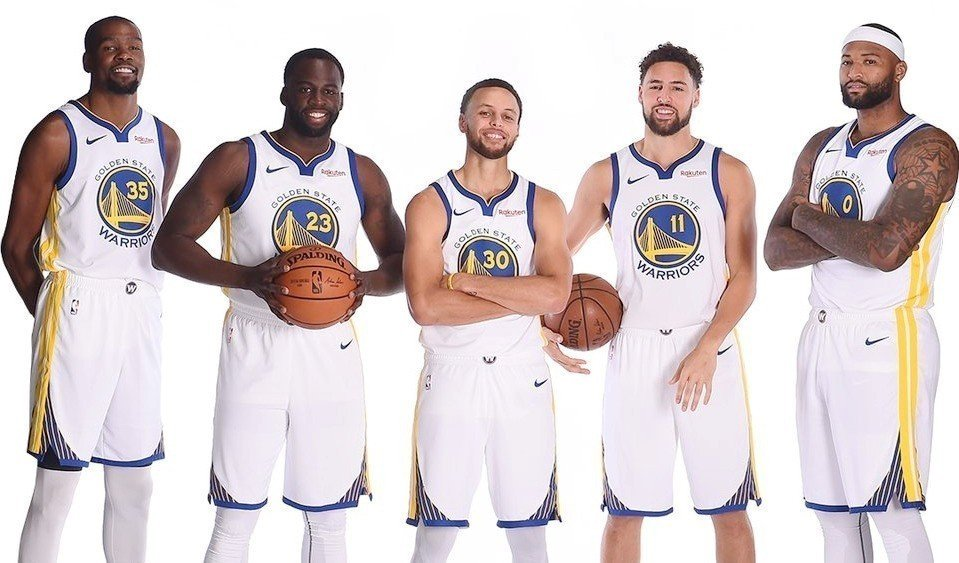 The Golden State Warriors are the favorites to hoist the Larry O’Brien trophy once again this year. (Photo courtesy of www.nba.com/warriors/.)

The Golden State Warriors are the favorites to hoist the Larry O’Brien trophy once again this year.

October comes with many great things such as Halloween, the MLB (Major League Baseball) playoffs, and best of all, the NBA (National Basketball Association) season begins. All fans hope their teams can make it to the playoffs this year, but only 16 will make it. As this new season begins, there are a lot of questions out there. Will the Warriors win their third straight title after signing a great center in Demarcus Cousins? Will LeBron James bring showtime back to the Los Angeles Lakers? Who will come out of the Eastern Conference? Will it be Kyrie Irving and the Boston Celtics? Kawhi Leonard and the Toronto Raptors? Or Joel Embiid, Ben Simmons and the Philadelphia 76ers? This season is sure to be an exciting one, and only time will tell which team has the talent, perseverance, and luck (yes, every team needs a little luck) to win the next NBA Championship.

What happened in the summer had a very big impact on this season, so let’s discuss it.

The draft this year was very interesting. Many highly ranked players fell, and general managers had some surprising picks. One such  pick was Kevin Knox from Kentucky. He was picked ninth overall in the first round by the New York Knicks. A lot of people felt that he should have gone lower.

One player that fell in the the draft was Michael Porter, Jr. from Missouri at pick #14 in the first round. At the beginning of the season, Porter, Jr. was projected number one, but a back injury caused him to miss almost his entire freshman year. He was supposed to go 10th in the summer, but ultimately fell to fourteen. A trade that happened during the draft was the third overall pick from Slovenia, Luka Doncic, for the fifth overall pick from Oklahoma, Trae Young, and a 2019 first-round pick. This trade was between the Atlanta Hawks and the Dallas Mavericks, and was planned before the draft started. It will be fun to watch all of these young players grow and develop this season. Then free agency rolled around, and several teams’ futures were changed.

The biggest change was LeBron James’ departure from the Cleveland Cavaliers to the Los Angeles Lakers. His deal to join the Lakers consisted of $153 million through four years. Lebron is unarguably the best player in the world, and any team he goes to is almost guaranteed a playoff berth.

Another big signing was Demarcus Cousins to the Warriors. Cousins, when healthy, is one of the best centers in the league. He played in f48 games for the New Orleans Pelicans last season before going out with a season-ending Achilles injury. The Pelicans did not make the playoffs in the one-and-a-half years that Cousins was there, so he is hungry for a championship, and since the Warriors are the reigning NBA champions, it may be the easiest way for him to win a title. It is only a one year deal worth $5 million, so he does not plan on staying. Also, the Warriors do not have enough cap space to pay Cousins a max deal. Other notable signings were Jabari Parker to the Chicago Bulls, Dwight Howard to the Washington Wizards, Isiah Thomas to the Denver Nuggets, and Tyreke Evans to the Indiana Pacers.

Off-season trades also altered the league. A trade that took over the media was the Kawhi Leonard and Demar Derozan deal. The Toronto Raptors traded Demar Derozan, Jakob Poeltl, and a projected 2019 first-round pick to the San Antonio Spurs for Kawhi Leonard and Danny Green. A Leonard trade was bound happen sometime this summer, after he demanded to be traded because he was upset with how the Spurs training staff treated his injury. He prefered a trade to the Lakers or Clippers, but is happy to be  in Toronto for now as the Raptors are one of the favorites to come out of the Eastern Conference this year.

Another trade was Carmelo Anthony for Dennis Schroder. It was a three-team trade between the Oklahoma City Thunder, Philadelphia 76ers, and the Atlanta Hawks. The Thunder got Schroder (Hawks) and Timothe Luwawu Cabarrot (76ers). The Hawks got Anthony (Thunder), Justin Anderson (76ers), and a 2022 protected first-round pick (Thunder). The 76ers got Mike Muscala (Hawks). Carmelo was waived shortly after the trade and signed a one-year $2.4 million deal with the Houston Rockets.

The two other title contenders in the East are the Toronto Raptors and Philadelphia 76ers. The Raptors have the best two-way player in the NBA in small forward Kawhi Leonard, and an all-around star in point guard Kyle Lowry. The Raptors have one of the best benches in the NBA, too.

The Philadelphia 76ers have a top-three center in Joel Embiid and arguably the best point forward (aka a small forward/point guard mix) in Ben Simmons. The Sixers also have a team of shooters and defenders around Simmons and Embiid.

A few sleepers in the East are the Milwaukee Bucks, Washington Wizards, and Indiana Pacers.The Bucks have Giannis Antetokounmpo, aka the Greek Freak, who was voted the best young star in the NBA.. The Wizards added Dwight Howard and Jeff Green to assist their core players of John Wall, Bradley Beal, and Otto Porter, Jr. The Pacers have great role players and a rising star in Victor Oladipo.

Theses are our seeding predictions for the playoffs in the East. We have the Charlotte Hornets coming in at the eighth seed. They have a star in Kemba Walker and some great role players. The Miami Heat will be  the seventh seed as the team has some of the best ball movement and defense in the NBA. The sixth seed will be the Washington Wizards because of John Wall, Bradley Beal, and Otto Porter, Jr. The Indiana Pacers, with Myles Turner and Victor Oladipo, will be the fifth seed. The Milwaukee Bucks are going to be the fourth seed. They have Giannis Antetokounmpo and some talented shooters. The 76ers will be the third seed, the second seed will be the Raptors because of Kawhi Leonard and Kyle Lowry, and  the first seed will be the Boston Celtics.

The favorite for this year’s title has got to be the Golden State Warriors. The Warriors are the two-time reigning NBA champions with superstars Stephen Curry and Kevin Durant, and All Stars Klay Thompson and Draymond Green. They also have a deep bench.

Another favorite in the West is the Houston Rockets. After last year’s trade for Chris Paul, the Rockets were the first seed last year, and have a lot of potential to be a top seed again. The star guards in James Harden and Chris Paul make one of the best backcourts in the league. The Rockets also have rising young star center Clint Capela, and a great bench with shooting guard and former Sixth Man of the Year Eric Gordon  and 10-time All-Star Carmelo Anthony .

The Oklahoma City Thunder is also a contender. When the Thunder traded for Paul George last year, no one thought that he would stay around in Oklahoma and that he would go to the Lakers. Instead, he re-signed a four year $137 million deal to stay around with top-three point guard Russell Westbrook and rising star center Steven Adams.

Of course, with the addition of LeBron James, the Los Angeles Lakers have also moved themselves into the conversation.They also have young stars in point guard Lonzo Ball and small forwards Brandon Ingram and Kyle Kuzma. They also have a great bench with Michael Beasley, Josh Hart, and Kyle Kuzma.

As for the sleepers, there’s the Utah Jazz. With second-year rising star Donovan Mitchell (shooting guard), and defensive guru Rudy Gobert (center), the Jazz can definitely contend in this year’s playoffs. They also have depth in the form of Joe Ingles, Ricky Rubio, and Derrick Favors.

There’s also he San Antonio Spurs. The Spurs have one of the greatest coaches of all time, Gregg Popovich, but they also have some talented players in Demar Derozan (top-five shooting guard) and Lamarcus Aldridge (top-five power forward). They have some role players, too, such as Patty Mills, Rudy Gay, Jakob Poeltl, and Pau Gasol..

These are our playoffs seedings for the West. Coming in at the eighth seed will be the Denver Nuggets as they have a top-five center in Nikola Jokic and a lot of depth. The New Orleans Pelicans will be the seventh seed. After losing Demarcus Cousins, the Pelicans still have one more great front court player, power forward/center Anthony Davis, Along with some good young players. The sixth seed will the San Antonio Spurs, the Utah Jazz will be fifth, the Lakers will be fourth, followed by the Thunder and the Rockets. The first seed will be the Warriors. The NBA season has many great things to come, such as the players the players’ Twitter feeds, midseason trades, future Hall of Famer Dwyane Wade’s last dance, Jimmy Butler’s contentious season with the Minnesota Timberwolves, and the Lakers’ drama with Lonzo Ball and LeBron James. But which team is ultimately going to raise the trophy?

I think the Warriors and the Celtics will square off in 2019, with the Warriors winning the series 4-2, their fourth championship in five years.

If you want a picture to show with your comment, go get a gravatar.

The Neersyde • Copyright 2021 • FLEX WordPress Theme by SNO • Log in