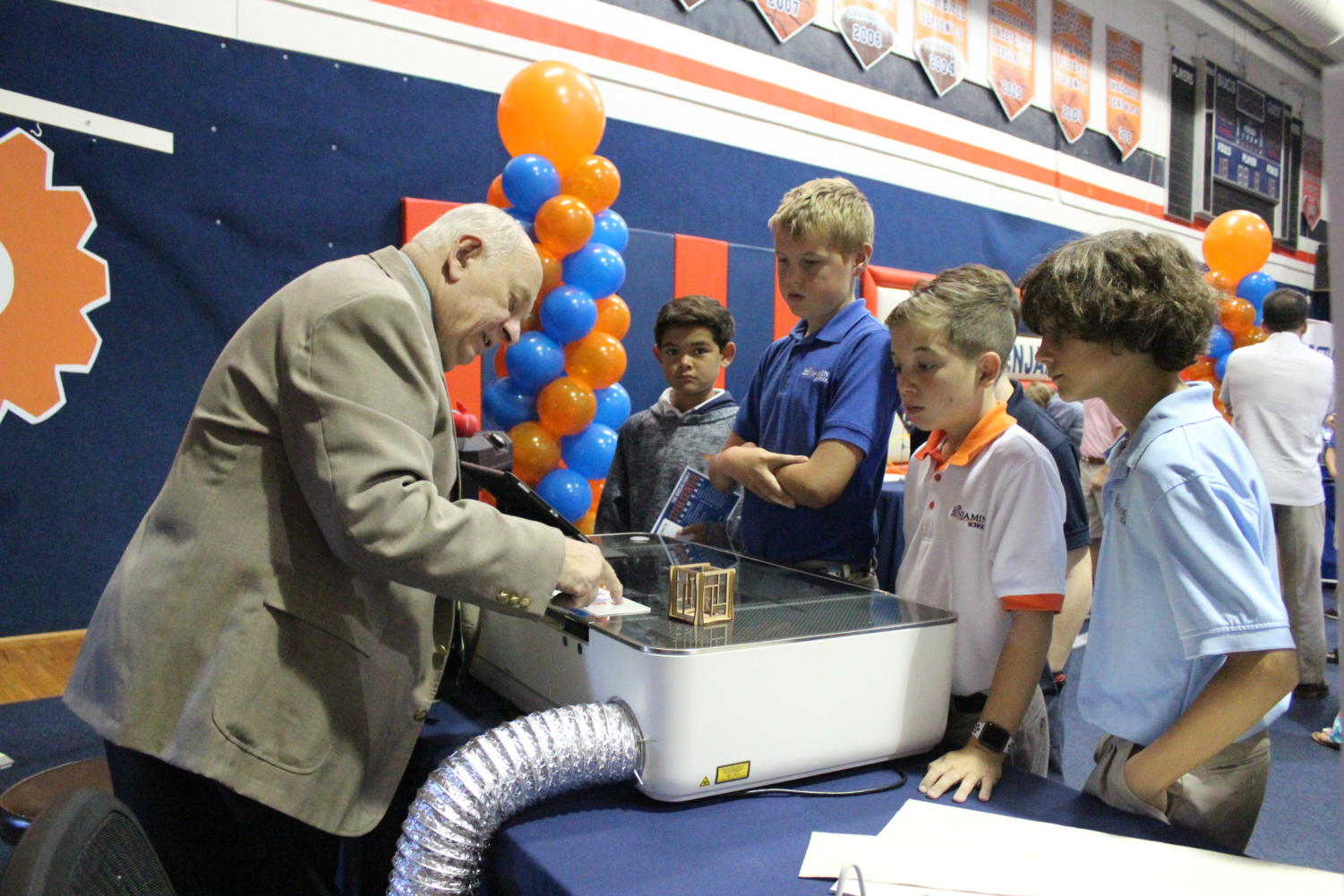 Virtual reality, 3D printers, laser cutters, and much more! All of this amazing equipment will be offered in the new Maglio Family STEM Center. STEM, which means science, technology, engineering, and math, was on full display in the Lower/Middle School Gym for the Maglio Family STEM Center Showcase on Friday, September 14. There were 27 booths displaying all kinds of cool gadgetry and technology, from allowing visitors to build their own video game character to understanding the physics of roller coasters to immersing themselves in a virtual environment.

“The main goal of the showcase was in lieu of the groundbreaking,” said STEM Coordinator Mr. Matthew Oster, who organized the event.“It was a place to show the parents and the students the upcoming curriculum and materials needed to run the STEM building.”

The TBS administration and vendors were very excited to introduce the STEM building to all of the students, faculty, and parents. Seventh-grade science teacher Mrs. Stephanie Oster,  was thrilled to see the reactions of the TBS community.

“I like to see the excitement on peoples faces when they see some of the cool stuff that’s going to be [in the Maglio Family STEM Center],,and some of the projects and activities that [the students] are going to be able to do,” she said.

Upper school computer science teacher Mr. Patrick Cullinane, who also the heads up the Benjianeers, Benjamin’s own  competitive engineering team, thought the event went really well, and also enjoyed seeing the reactions of the students and teachers. “[I liked] just making sure that all of the kids and parents saw all of the cool things throughout the school,” he said. “It was a good turnout, many people showed up, and [there were] lots of interactions, so I think it was fun.”

There were  a number of presenters on hand to tout the technology that will fill the new building. “All of the presenters were from our school,” said Lower School Science Department Chair Mrs. Susan Bickel. “[Also], the furniture vendor was there, the architect was there, the designer was there, so there were some outside people who have influences in what we were doing and were presenting,” she said.

At the beginning of the showcase, the parents were able to explore and see the wonderful things that the STEM building has to offer. After that, the Lower school and Middle school were able to experience the wonders going on inside the gym.

“I liked the plant activity, and I think it is cool that you can grow plants faster,” said fifth-grader London Allen, referring to the booth showcasing hydroponics.  “I liked looking at the robotics and cars, and I think the event was organized well, and was fun,” said fellow fifth-grader RJ Pierman.

There were even a few students that helped out, such as eighth-grader Eric Levine. “My favorite part from the helping out perspective was that I got to be very interactive with everyone,” said Levine. “Since there were children from WOW [through] eighth grade, there was a variety of different students who were able to see all that was going to happen in the STEM building. I got to spend time with each grade which was really cool.”

Many of the students were excited to get a preview of what’s to come in the new Maglio Family STEM Center.

“My favorite part of the STEM showcase was seeing how the rooms are  going to look like [at the architecture booth, and] seeing what we are going to be using and doing in the building,” said seventh grader Gracie Greaton.

“I think the showcase was very interactive and was great,” added seventh-grader Zach Neidoff.

The TBS community won’t have to wait too much longer to get a glimpse inside the building as it’s currently set to open in April of this school year.

If you want a picture to show with your comment, go get a gravatar.

The Neersyde • Copyright 2020 • FLEX WordPress Theme by SNO • Log in