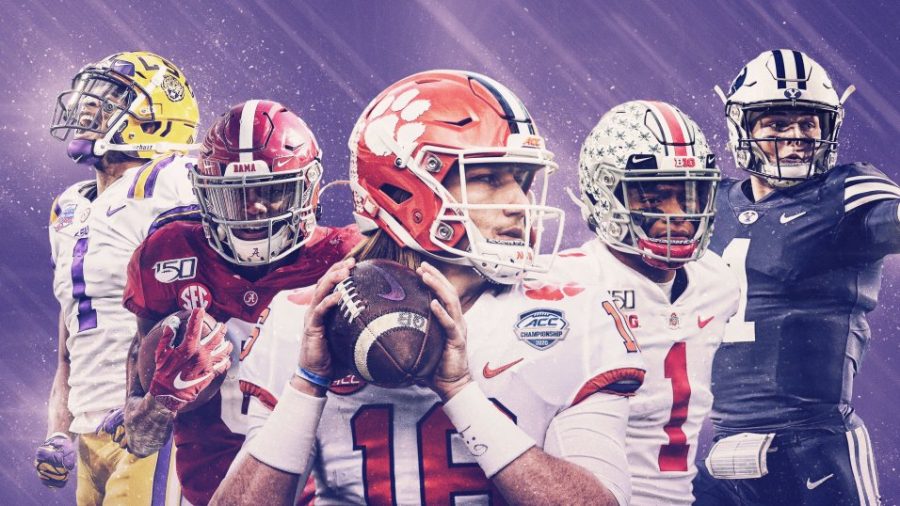 Ja'Marr Chase, Devonta Smith, Trevor Lawrence, Justin Fields, and Zach Wilson are hoping to make a big splash in this year's NFL Draft and take the next step in their football careers.

The NFL Draft has become a must-watch event over the last few years, gaining in popularity as the NFL has replaced baseball as America’s favorite pastime. This year’s draft may be a little different than those that came before it as there is so much uncertainty surrounding each pick.  Nobody knows where anybody could go. However, this year’s draft class is stacked with many talented players. College prospects that would be drafted in the top five during any other year may be drafted in or out of the top ten.

Having said that, here is The Neersyde’s mock draft for picks one through sixteen. Readers will also find comparisons between each prospect and a current or former NFL player.  So, without further adieu, here we go.

This is the obvious number one pick. Lawrence is just a dynamic player all around that can do everything, and that was why first-year Jacksonville Jaguars Head Coach Urban Meyer came out of retirement for this special guy. Since his freshman year, Lawrence already looked like a number one overall pick as he led Clemson to the National Championship. He is the whole package as he can run, make passes, and is a true leader. This will be great for the Jags as it is a team in need of severe help, especially at quarterback.

The Jets have many options here as they can trade back or go the smart way and pick the second-best QB in this draft. Although anything can happen on draft night, the Jets appear to be “all-in” on Wilson according to The New York Post. At BYU, Wilson’s receivers were not the best, but he still put up unreal numbers, he takes chances, he spreads the ball equally, and his abilities on the move are incredible, which is what makes him a great quarterback.

Now, the 49ers could definitely draft Mac Jones here, but I don’t see that happening since he doesn’t fit their scheme. The 49ers are in a rough situation right now in terms of their offense. After acquiring QB  Jimmy Garoppolo from the Patriots the Niners went  4-0 in the first four games of the 2018 season. He then played well enough the following year to get them to the Super Bowl, but more of the credit should go to the Niners defense then Garoppolo. This past year, when their defense was injured, the Niners suffered and stars on defense got hurt because  Garoppolo couldn’t lead them back to the playoffs. As a result, they need a guy like Fields.  He’s a quarterback who’s accurate, intelligent, athletic, and can launch the ball downfield.

Many experts believe the 49ers will pick Mac Jones, but if they don’t, the Patriots will rush to the phone to trade up to number four. The Pats’ General Manager/Head Coach mastermind, Bill Belicheck, will most likely jump at the chance to land Mac Jones. They are eager to have a quarterback like Tom Brady again, and Mac Jones is the closest to him in this draft in terms of his build and ability. While he still lacks the athletic profile that the NFL has at QB, he is a dead-eye pocket passer who could comfortably come in and operate a Patriots’ offense that has relied heavily on the run game for the last two seasons.

Since last year’s number one pick, QB Joe Burrow, tore many ligaments in his knee, including both the  ACL and the MCL, earlier this season, the Bengals have had their sights set on an offensive lineman. The Bengals offensive line is awful. If they have the best tackle in the class falling to their pick at number five, I can’t see who else they would pick over Sewell. He is a tackling force who can block almost anybody.

Now, this may be a surprise, but since Dolphins’ QB Tua Tagovailoa is used to a two-tight end offense which he helped run at Alabama, this is a great pick for Miami. Ja’Marr Chase, the star LSU wide receiver, could definitely go here, but it’s between him or one of the best prospects I have ever seen come out of college, Kyle Pitts. Pitts can play either receiver or tight end since he has the abilities of the former, but the body of the latter. The most pressing need is to provide Tagovailoa with a dominant receiver, and although Pitts is a tight end, there is a convincing argument that he is the best pass catcher in the class. As he did not drop one pass in his last season at Florida, Pitts is easily the best tight end in the class, and is going to make a big impact on this Dolphins’ team.

Receiving Jared Goff in a trade from the Los Angeles Rams this offseason makes Detroit a prime target for a solid receiver. Since losing Kenny Golladay and Marvin Jones, their two star receivers, Detroit finds itself in a tough position. They need receivers badly, but they are also struggling on defense. They could pick Rashawn Slater, an interior offensive lineman out of Northwestern, here, but I can’t see them passing up the best receiver in the draft.  When Ja’Marr Chase has the ball in his hands, he is a problem for the defense because he is very quick and shifty. Comparison: Anquan Boldin, WR – Detroit Lions

With Teddy Bridgewater at QB last year, the Panthers were not a threat in the NFC South and finished 5-11. However, now they seem to be set with their new QB, Sam Darnold, since his arrival this offseason from the New York Jets. As a result, Carolina needs to invest in its offensive line. The Panthers are most likely  going to go with  Slater to protect Darnold’s blindside as he is a prospect who can do almost anything on the line.

Lance could be picked way higher in the draft, but if he falls to number nine, the Broncos will most likely snatch him up. Denver’s QB situation is not looking good with Drew Lock as the current starting quarterback. Denver believed in him, but now it’s looking like he may be a bust. Lance, on the other hand, could be the team’s QB of the future. . He will have weapons, such as receivers Jerry Jeudy and Courtland Sutton, and is a strong prospect who can do everything. Lance has a cannon for an arm, and his ability to create plays with his legs like many of the star quarterbacks in the league could make him a future star. Comparison: Josh Allen, QB – Buffalo Bills

If the Falcons hadn’t  traded back, they could have definitely picked Surtain at number four However, since they traded back to 15 in a swap with the Patriots, Surtain isn’t dropping out of the top 10. The Cowboys’ weaknesses are obvious at the cornerback position, where second-year player Trevon Diggs leads the depth chart along with Chidobe Awusie. The Cowboys still need a playmaker on the field, though, that is physical and can tackle when needed, and Surtain is that guy. He has the body build, skills, and instincts of a shutdown NFL cornerback.

Although the Giants recently acquired WR Kenny Golladay, they are only halfway there as they need another reliable receiver who is speedy. Waddle is that guy – he’s as fast as anybody in the NFL and can get behind the defense. He possesses a combination of  speed, hands, and elusiveness that will make a defender miss easily in the open field. Waddle, in my opinion, is better than Alabama WR Devonta Smith because of his pure  ability to play.

The Eagles are another team in need of a receiver, and Smith is a dynamic playmaker on the field, but his size is his greatest weakness; one of the main reasons why he won’t be drafted in the top 10. However, he did win the Heisman this past year as a senior and will pose a problem for defenders. In the national championship game this past year, Smith put up 200 receiving yards just in the first half. Smith is a ready NFL receiver and could be a lethal weapon on whichever team he drafts him. He is a clutch player with solid playmaking skills. He also has the ability to make plays after the catch, and pick up extra yards play after play.

The Chargers have a solid team, but when it comes to QB protection, that is one of their weaknesses. . . The Chargers did not win many games this year because of the lack of protection for impressive first-year QB, Justin Herbert. That’s where Vera-Tucker comes in. He can play anywhere on the field, and can block both the pass and run. He is a great left tackle, and filling in that hole on the offensive line will be a perfect fit for the Chargers.  This monster will be a mainstay on the Chargers for years to come.

The Vikings are similar to the Chargers as they have a very good team, but just have holes at certain positions. They need a better defensive line to get through the tough offensive lines that make up most of the teams in the NFC North. Anyone who has seen Barmore just obliterate offensive lines game after game knows that he would be a great fit for Minnesota. His outstanding size, strength, and speed makes him an elite pass rusher. Minnesota needs to find a solution for their interior defensive line, and Barrmore fills that hole.

The Falcons are in a very tough position. They have many needs, but when it comes to defense, they are simply giving up too many points to teams. As a result, they need a playmaker in the middle of the field, and the best linebacker in this draft, Micah Parsons, will take this team to a different level. His abilities are off the charts with his tackling and coverage – he can do everything. I think Parsons could go very high in this draft, but not many teams need linebackers that badly. Still, I wouldn’t be surprised if he was taken in the top ten.

This looks like an obvious pick after  the Cardinals parted ways with All-Pro cornerback Patrick Peterson. Who will fill in that weak cornerback position? Bryon Murphy? Well, he’s already on the Cardinals and they need somebody else. Horn will be a great fit for this team. He can lock up anyone and will soften the blow of Peterson’s departure. The way Horn plays the game makes him a clear favorite to be the pick here. His trash talking may very well get in the heads of the NFC West’s star receivers such as DK Metcalf, Brandon Aiyuk, Tyler Lockett, Cooper Kupp, and so on.

This draft class is very intriguing and talented, even those that are out of the top 16, and perhaps all the way to the seventh round. Anything could happen on draft night, so to see if these picks will end up playing out, tune into ESPN or ABC on Thursday, April 29 to watch this year’s NFL draft live from Cleveland, Ohio.