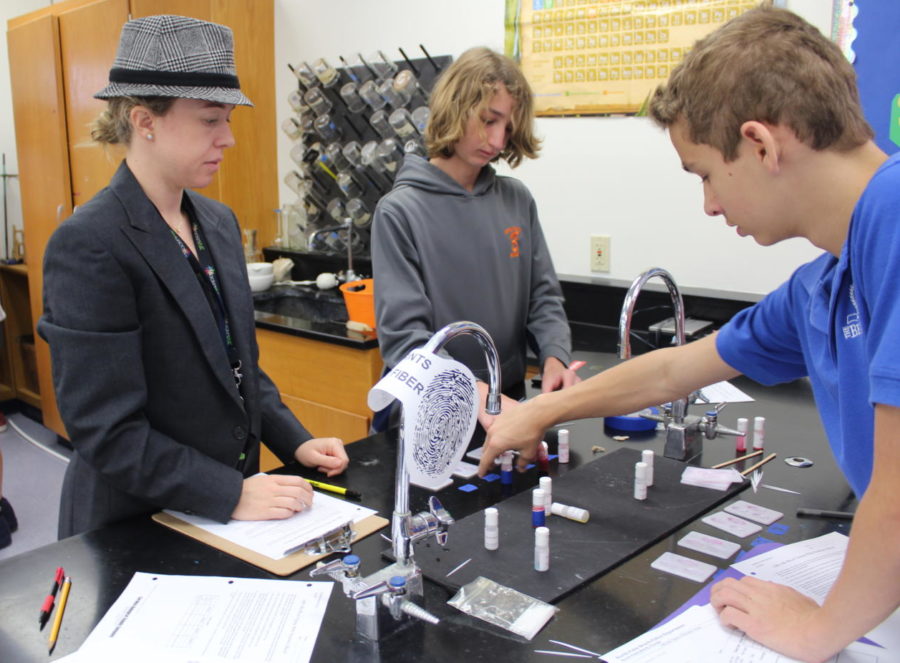 Murder! Murder in room 54 at the Benjamin Middle School!  While all the details haven’t been sorted out, there appears to be the outline of a body on the floor, and the stains of a few unknown substances next to it. In addition to that, a baseball bat was found with blood splattered all over it. The FBI showed up with a very experienced agent, Detective Redwine. She is the twin sister of eighth-grade science teacher Ms. Sara Featherston, who has mysteriously gone missing.

Okay, maybe these two individuals are one and the same, but it’s Featherston’s way of engaging her students in her latest lab which focuses on forensics, or scientific tests and techniques used to solve crimes.

“I used forensic science because it has to do with chemistry and at the same time build their social skills,” said Featherston, who teaches the eighth-grade SEA (Science, Exploration, and Analysis) class. “In this lab, I have let the students have a more hands-on experience [because] it [encourages] team building.”

Students, placed in groups of two, three, or four, had to determine which of the three suspects – Mr. Cavallo, Coach Filia or Coach Keller  – was the murderer. As it turns out, Cavallo was the culprit.

“It was very fun and interesting being the suspect,” said Cavallo. “But, I found it weird that I was accused of murder before even being investigated – I’m always guilty! I did find it annoying that every five minutes students came into my office for fingerprints, but I was happy to help,” he said.

The purpose of the powder analysis was to find out what type of powder was found at the crime scene by adding various liquids to the powder samples and seeing how the powder reacted. The powder left at the scene turned out to be baking soda which the students deduced through their series of tests.

The students enjoyed the hands-on lab and the challenge of having to solve the “crime.” “I had a great time doing the lab and finding out who was the murderer,” said eighth-grader Alex Bories. “We learned how detectives do their job and how things like chromatography work. It was overall a great experience.”

“It was very interesting,” added fellow eighth-grader Skyler Malmberg, “because we had to solve the mystery with all the clues that were given like the mystery powder found at the crime scene. It was fun to learn how detectives find fingerprints and how a crime scene works.”

As far as having fun and learning about different crime-solving techniques, this case is closed for the students (and, thankfully, no actual teachers were harmed in the conducting of this experiment).