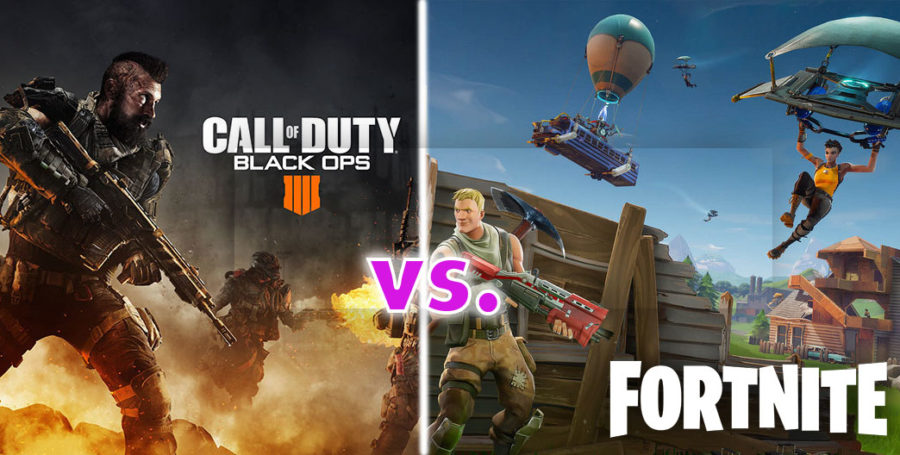 Many students enjoy the similarities between these two games, especially when it comes to the "Battle Royale" and "Black" Out" modes.

No video game has ever been as big as Fortnite. According to www.forbes.com, In April of 2018, it made $318,000,000, which is $100 million more than any other free games have made in one month. Thanks to Fortnite, Epic Games, it’s developer and publisher, is now worth about $8 billion. However, Forbes also reported that a new game which recently hit the market, Call of Duty Black Ops 4, made $500 million just on the launch date –  July 25, 2017. It contains three game modes: multiplayer, zombies, and the new format called  “Black Out,” which is also like Fortnite’s  Battle Royale mode. The new Call of Duty (CoD4) also contains the biggest map in the history of the Call Of Duty franchise, which debuted on October 29, 2003.

In CoD4’s Black Out mode, which is very similar to Fortnite’s Battle Royale mode, one hundred players jump out of a plane and land at their chosen landing spot. They must grab weapons and medkits to survive any attacks from enemy players. A big feature about this game is the vehicles: helicopters ATVs, boats, and trucks, which are more realistic vehicles than the ones available in Fortnite. Supply drops are provided from planes passing over the island containing weapons and health for players. The last man standing wins.

Multiplayer in CoD4 is similar to Black Out, but each player respawns. There are multiple game modes in multiplayer: free for all, capture the flag, secure different points, or player vs. player (PvP), which is simply two teams trying to get the most amount of kills. A player can also earn different camos and weapons for their characters without buying them. This is different from Fortnite where the only way to upgrade your skin or weapon is via in-game purchases. Call of Duty: Black Ops 4 is also a first-person perspective whereas Fortnite is third person.

In addition, Fortnite is more cartoonish than CoD4 as there is no blood when a player’s avatar is hit, only sparks. Plus, players also have to break things to gather resources to build bases unlike in CoD4. CoD4 is obviously more realistic and has more game modes for players who have variety of tastes in terms of how they want to play.

“Fortnite is meant to be more of an age-appropriate shooter,” said eighth-grader Jonathan Skatoff. “It’s also free to play which is great, but it’s crazy how it makes all its money only on outfits [for avatars] that don’t even help you in [the] game,” he said. An average skin in Fortnite costs users about $25.

However, there are some students who prefer the new Call of Duty. “CoD4 is definitely better because they have many different game modes, which makes it harder to get better, which I like,” said seventh-grader Matthew McMahon. “It is definitely worth it, and since it is a new game, no one is [better at it] than someone else.”

These games are so addictive because of the drive to be the best and win. Users enjoy the challenge of beating 99 other people in Battle Royale or Black Out modes. Players can get infinitely better at the game and show others on Twitch – a live game-streaming site – how good they are.

Fortnite made the Battle Royale mode popular because of its amazing “building” feature, which has never been in any Battle Royale-related games before. By utilizing different structures such as walls, ramps, floors, and pyramids, users employ different strategies to get the high ground in the game, giving them an advantage over their opponents.

Because of this “building” aspect, Fortnite takes more skill because users need to be good at building and develop the best strategies so as not to get shot down and get the advantage over one’s enemy. Constantly playing improves gameplay, which is why Epic Games made a playground mode where users can have fun with their friends while practicing to improve their gameplay.

There are some people who even make vast amounts of money playing Fortnite and other video games. According to a recent article by www.buinessinsider.com, “In an interview with CNBC, [27-year old Tyler] Blevins [aka Ninja] confirmed he earns over $500,000 a month from his more than 160,000 paid Twitch subscribers, which are separate from his 4 million followers on the same platform.”

In addition, Blevins also generates income from the sponsorship deals he has with Red Bull, PSD Underwear, and Uber Eats.

Perhaps that’s why, according to a recent Wall Street Journal article, some parents are now hiring Fortnite coaches for their children.

Regardless if students prefer Fortnite or Call of Duty Black Ops 4, the message is loud and clear. The video game industry is continuing to grow and shows no signs of slowing down. What will be the next big technological advancement in terms of gaming, what new title will overtake Fortnite, and who will be the next eSports star? Who knows, but the answer to the last question may be walking the halls of Benjamin’s Middle School right now.