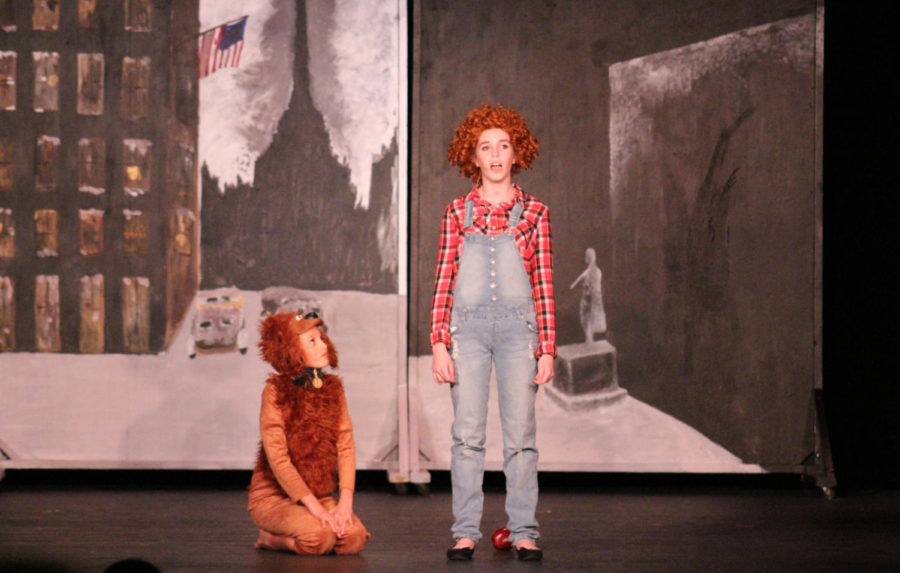 With great acting and spectacular singing, Annie, this year’s middle school musical, was a huge success! Hundreds of people, including parents, teachers, and students, came to see the musical theater students’ rendition of the classic Broadway and Hollywood hit which was held April 12 and 13. Played out on the Barker Performing Arts Center stage, Annie tells the story of an orphan in 1930s New York who is invited to spend a Christmas with millionaire Oliver Warbucks. However, the mean-spirited Mrs. Hanigan, who runs the orphanage, devises a plan with her brother and his girlfriend to swindle Warbucks out of a fortune by having the couple pretend to be Annie’s parents. It all turns out okay, though, as Annie’s orphaned friends help her thwart the plan, and she is officially adopted by Warbucks at the end.

Both the teachers and students enjoyed watching the musical theater students perform. “The whole show was incredible,” said middle school English teacher Mr. Nathan Ginnetty. “I was so impressed by the actors, the singing, and chemistry everyone had with one another. It was so impressive that Casey Crawford [Drake the butler] learned all his parts in one day. It was also funny how Emeline Smith’s part was nothing like how she acts in real life. Her role in the play was mean old Mrs. Hannigan, but in real life, she is a very nice student.”

Like Mr. Ginnetty, sixth grader Gianna Demerski thought that the play was “amazing and also really interesting. It was full of action! My favorite part of the show was definitely when the orphans started singing ‘It’s a Hard Knock Life.’”

“[We had] the right singers and actors for the play,” he said. “We chose it to fit the class – some of the students are multi-talented.”

Although the class pulled it off, it was under pressure from the beginning due to time constraints.“We got scripts in February and it was already so close to the play,” said Bayless. “With the Spring break that came and other things like the play, there were only about two months for rehearsing.”

The students felt the pinch as well.

“The rehearsals were basically just running through all the songs, dances, and scenes together,” said seventh grader Sarah Darby, who played an orphan in the musical. “We did not run through the whole play until the last two rehearsals. But through all the struggles, we all performed fantastically.”

Even with all the difficulties in the making, Mr. Bayless and his students pulled off a great show and impressed many in the audience.

“I really liked it,” said seventh grader Anthony Pace. “The play was very enjoyable. My favorite part was when [seventh grader] Alex Bories acted and sounded like a rooster. That part made me laugh so hard.”

With a talented cast and seasoned director, Annie was definitely a hit, and that’s something on which you can bet your bottom dollar.