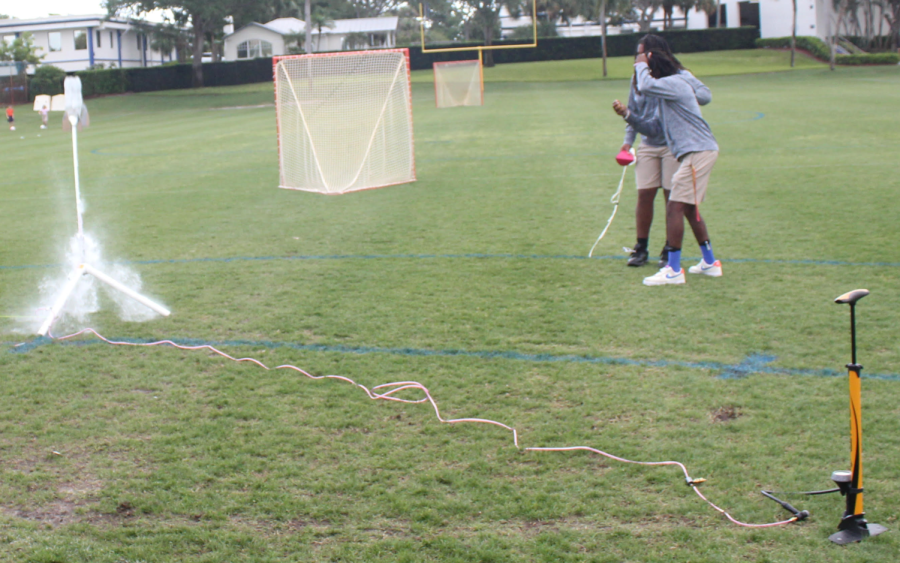 As a rocket launches, eighth graders Chancellor Reddick and Dylan Bennett shield each other from the mist of the rocket shooting in the air. Students filled the water bottles one-third of the way with water to help propel the rocket into the air.

NASA isn’t the only place where you can find actual working rockets. They have also become part of Mrs. Stacy Schnurr’s eighth-grade science class. Students have been working in groups of two and three to create a rocket equipped with a parachute that can successfully carry an egg and bring it back down to Earth without it cracking.

“This project enables students to experience [Sir Isaac] Newton’s Laws and provides opportunities to talk about the structure of a rocket and aerodynamic forces,” said Schnurr.

The activity was a difficult one for students.

“The most challenging part was testing the parachute, but we realized to make sure it works, we can tape a rock to the parachute to see how well it floats to the ground,” said eighth-grader James Tepper.

Schnurr left the creativity to the students, allowing them to bring in any materials they thought would work best. One of the few stipulations was that the rocket needed to be made from a two-liter soda bottle.

“The process of making the rockets was relatively easy, [but] difficult at the same time,” said eighth-grader Sadie Weaver. “We started with a normal two-liter [soda] bottle, from which we added fins, and a nose cone, which needed to have a hand-made parachute and an egg underneath.”

Newton’s third law of motion, discovered by the British scientist in the seventeenth century, states, “When two bodies interact, they apply forces to one another that are equal in magnitude and opposite in direction,” which relates to how the rocket launches.

“The rocket launcher works by water propulsion, which results in thrust, so the bottle is filled 30-40% with water, then the air is pressured to 60 psi,” said Schnurr.

According to Schnurr, in addition to learning about physics, the students also learned how to work together.

“Teamwork allows you to work on leadership, collaboration, and communication skills while problem solving,” said Schnurr. “Students learn responsibility and perseverance, as well as patience,” she said.

As a result, the project was both educational and rewarding for the students.

“I learned a lot about Newton’s laws, especially his third law of motion,” said Allen. “We also learned how to work as a team and make sure everyone’s ideas are valued, and how to make a really cool bottle rocket!” she said.